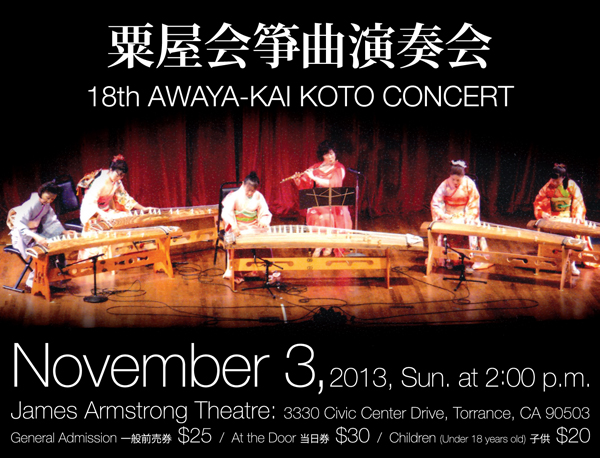 The Yoko Awaya Koto Music Conservatory (a.k.a. Awaya-Kai) was founded in 1975 in Los Angeles by Yoko Awaya, a koto and jiuta sangen instructor and performing artist.

Ms. Awaya studied at famed Michio Miyagi School of Koto in Tokyo where she received teaching and master’s degree.

The conservatory is dedicated to promoting the art of koto and jiuta sangen music and seeks to enhance Japanese cultural and ethnic awareness and appreciation not only in Southern California but also throughout the United States.

Currently, over 40 members study the koto and jiuta sangen under the direction of Ms. Awaya. 18 students have graduated with their teaching degree from Michio Miyagi School of Koto in Tokyo.

The conservatory members have performed throughout California and United State, including the Los Angeles Music Center, The Dorothy Chandler Pavilion, the US-Japan Expo, USC, UCLA, The Sun Francisco Conservatory of Music, The Macky Auditorium in Colorado, Lafayette College in Philadelphia, and Jacobs Pillow in Massachusetts.