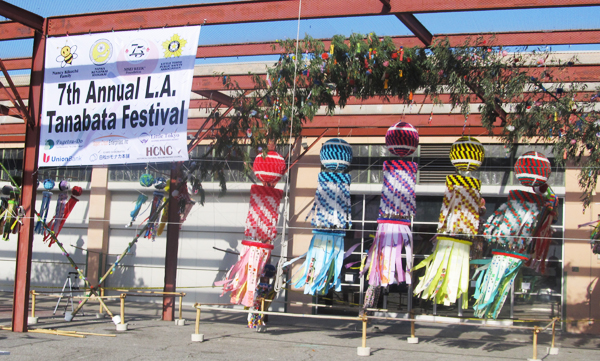 Dubbed as summer Christmas trees, bamboo trees will be decorated with kazari or ornate steamers for celebrating a celestial rendezvous on the seventh day of the seventh month according to an Asian mythology. The ritual with bamboo trees has been called Tanabata, and the largest Tanabata festival in Japan has been held in the city of Sendai in the Miyagi Prefecture since the 1600s.

In Sendai currently, the prominent centerpieces of the Tanabata are displayed along streets and markets.

The 2015 Los Angeles Tanabata Festival will take place during Aug. 14 – 17 at adjacent space to the Museum of Contemporary Art (Geffen) in Little Tokyo.

Under theme of “Heart & Soul,” hundreds of seven-foot height kazari from Japanese communities in Los Angeles and the ten best kazari of the 2014 Sendai Tanabata Festival will be unveiled at the 5:00 pm opening ceremony on Friday, Aug. 14. This year’s Tanabata festival will honor Sendai businessman Ichiro Shiromatsu who has supported Los Angeles event since 2009.