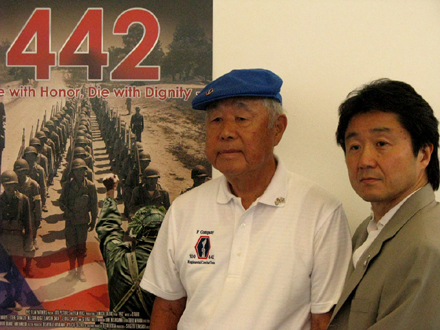 Screening schedule at other cities

Second screening from October 1 to October 7

442-Live with Honor, Die with Dignity is the second installment of the Japanese American trilogy following the previous documentary film, Toyo’s Camera – Japanese American History during WWII.  Suzuki and UTB, a bilingual Japanese television station in Los Angeles have produced the feature documentary film collaborating with the music of the Grammy and Golden Glove awards winner Kitaro again.

During World War II, soldiers of the 442nd Infantry Regiment, composed mainly of Japanese Americans, fought not only against the enemy, but fought against prejudice, facing severe racial discrimination in their homeland.

In these harsh times however, the 442nd became one of the most decorated regiments for its size and length of service in the history of the U.S. military.