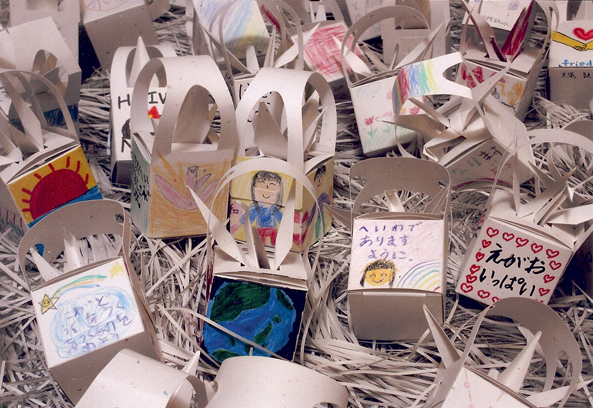 Heiwa no Kakehashi – “Bridge of Peace”

On Saturday, May 14, 2016, the Gardena Valley Japanese Cultural Institute will celebrate a day of peace, hope, and friendship.

The program, called, “Heiwa no Kakehashi,” translated as “Bridge of Peace,” will commemorate and continue the inspiring legacy of Sadako Sasaki, a young Japanese girl who died of leukemia after being exposed to radiation produced by the atomic bomb dropped on Hiroshima in 1945.

Sadako folded 1,000 origami cranes in the hope of surviving her leukemia, and Sadako and the paper crane have become international symbols of peace for children around the world.

The Heiwa no Kakehashi program will include the folding of paper crane boxes that are decorated by the students of the Nobori-Cho Elementary School in Hiroshima, Japan, the actual school that Sadako attended.

The crane boxes are decorated with images and messages of hope, peace, and friendship.  Each child who folds a paper crane box will get to keep the box.

The crane boxes are made of recycled paper produced by “orizuru” (paper cranes) that are offered to the Children’s Peace Monument in Hiroshima.

Each year, approximately 10 million paper cranes from around the world are offered to the monument.

Another part of the GVJCI program includes the decorating of paper cranes by children at the event, and these paper cranes will be sent to the children of Nobori-Cho Elementary School.

Another part of the program features “Sadako’s Story,” written by Masahiro Sasaki, Sadako’s older brother, that tells the moving story of Sadako and her paper cranes.

Masahiro was four years old when the atomic bomb was dropped, Sadako was two years old.

Music will also be featured in the program, including the singing of “Inori” (Prayer), written by Yuji Sasaki (Sadako’s nephew), with lyrics in Japanese and English.

“Inori” is inspired by Sadako’s story; Yuji explains how he came to write the song: “Despite facing death, Sadako always showed a brave smile to her family. I tried putting myself in her place to compose the lyrics.”  The song will be sung by members of the Wings of Peace choir conducted by Rachel Chew, along with guest artists.

The GVJCI program was initiated by Keiko Kawashima and Scott Nagatani, local artists who are members of the Grateful Crane Ensemble.

Japanese photographer, Ken Shimizu, originated the paper crane boxes project at the Nobori-Cho Elementary School.  Ken’s hope was to share these messages of peace and hope with children all over the world; in Ken’s own words, “By taking each other’s hand, sharing prayers for peace, understanding and showing compassion for one another, we believe that we can overcome any kind of differences that may exist between us. “

Unfortunately, Ken passed away last year, and was unable to share the crane boxes with the children of the world, so now Keiko and Scott are committed to carry forward Ken’s mission.

Keiko says that, “The messages on the boxes are very moving, such as, ‘Think Peace!’ and ‘Hiroshima Friends.’  The children’s artwork make strong statements; some had drawings of weapons or bombs with an ‘X’ crossing them out, with words like, ‘wrong’ or ‘bad’ written next to them.

Each box is uniquely different.  We hope people will be happy and touched by the crane boxes and this meaningful gesture.  It is a gift from children in Japan who hope to make a connection to people in America with their messages of friendship and world peace.”

It is the hope of the GVJCI, Keiko, Scott, and everyone involved that this will become an ongoing exchange of friendship between children in America and Japan.