The Little Tokyo Historical Society will present an exhibition of Hayahiko Takase, architect of many of the iconic buildings in Little Tokyo from Sept 30 – Oct 10 at the Doizaki Gallery of the Japanese American Cultural and Community Center, 244 South San Pedro Street, Los Angeles, CA 90012. Admission free.

The exhibition is intended to honor the legacy of Hayahiko Takase and the contribution that he has made to the visual landscape of Downtown Los Angeles, in defining Little Tokyo as a unique and changing place that has stood the test of time, blending art, tradition and the spirit of more than just two cultures.

The exhibit will also display Takase’s architectural work and a model of his current project, the Budokan, the sports and recreation center to be built in Little Tokyo.

There will be some of his shikishi (card board) art, too.

In addition to the exhibition there will be a number of informal talks by Mr. Takase as well as several walking tours of the buildings in Little Tokyo.

As a successful and active member of Los Angeles’ Japanese American community, Hayahiko Takase plays a significant role of its cultural heritage.

His architectural works have been seminal to the revitalization of Little Tokyo.

For the past fifty years, Takase has combined his educational experiences at Tokyo University in Japan and Harvard University in the United States to create edifices that reflect the dual identity of Japanese America.

In 1967, he designed the historic Kajima building, the first commercial building to be built in the U.S. by a Japanese construction company.

He designed the classically Japanese Higashi Honganji Buddhist Temple in 1976, as well as the modern Kyoto Grand Hotel (formally the New Otani Hotel and Garden) in 1978 and the Miyako Hotel in 1986—places that continue to define Little Tokyo today.

The latest project that is in progress now is the Budokan, a sports and recreation center that will serve the Japanese American community, a scale model is included in the exhibition.

Takase is also known as a creative cultural leader in the Japanese American community who contributes his expertise and artistic talents to various civic and cultural groups. By teaching and sharing Japanese artistic and architectural styles, Takase has brought Japanese Americans back to their roots in a visually stunning way.

Walking tours led by Mr. Takase and the Little Tokyo Historical Society volunteers will be offered during the exhibition.  Participants of the walking tour will be able to see the world through Takase’s eyes by engaging with the actual buildings that he designed.

This program is funded through the 2010 Community Outreach Program Grant of UCLA Paul I. and Hisako Terasaki Center for Japanese Study, with additional support from the Japanese American Cultural and Community Center. 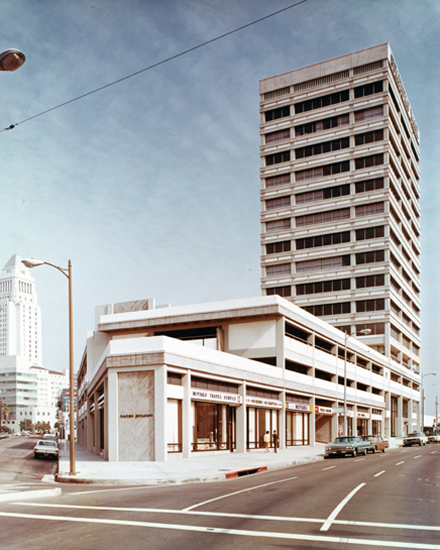