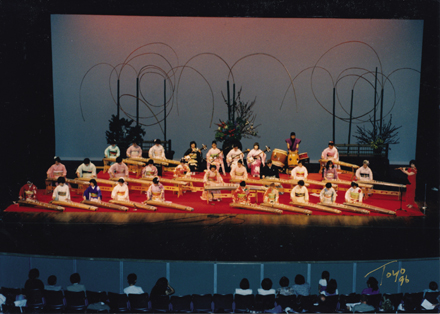 This year’s production will include performances by Mme. Yoko Awaya and members of the Yoko Awaya Koto Music Conservatory as well as several distinguished guest artists and performers.

Mme. Yoko Awaya received her teaching and master’s degree from the famed Michio Miyagi School of Koto in Japan. In 1974, she founded the Yoko Awaya Koto Music Conservatory, a nonprofit organization dedicated to the promulgation of koto and shamisen music while enhancing cultural awareness and appreciation.

The concert will feature a special guest artist from Japan, Mme. Senba Kokun.  Mme. Senba is a renowned tsuzumi (Japanese drum) artist and teacher who has conducted workshops and seminars internationally and performs and tours extensively in Japan and the United States.

She will perform a duet with Mme. Awaya of classical pieces from “Rokudan” and “Midare.”

The concert will also feature a variety of music from classical to contemporary and from Western to Japanese.  Pieces include “Sakura New Version” (a dynamic orchestral piece with many guest artists), “A Maiden’s Prayer,” “Medley of Japanese Children’s Songs,” “Okinawa Folk Songs” and “Ponyo on a cliff.”

Bill Crowley will be the Master of Ceremony and will perform Rakugo, traditional Japanese comedy storytelling.

A portion of the net proceeds from this year’s concert will benefit Keiro Senior Healthcare.

General admission tickets are $25 if purchased in advance or $30 at the door.  Children (5-12 years old) tickets are $10.  Advance tickets are available as follows: