Mr. Toshihiro Shibata, principal of Iino Elementary School, shows a message board from a Los Angeles group that sent a donation to the school in early June 2016 soon after the earthquake in Kumamoto Prefecture, Japan. (Courtesy of Walk and Talk)

A Los Angeles hiker group with the name of “Walk and Talk” send the relief fund directly to victims at an elementary school in Mashiki Town, Kumamoto Prefecture soon after the April 2016 earthquake in Kumamoto. 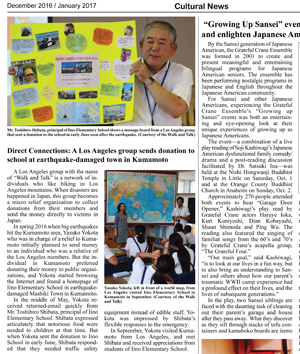 $3 donation is suggested for subscribing a single copy. For requesting the Dec. 2016 issue and sending your donation, www.culturalnews.com/donation