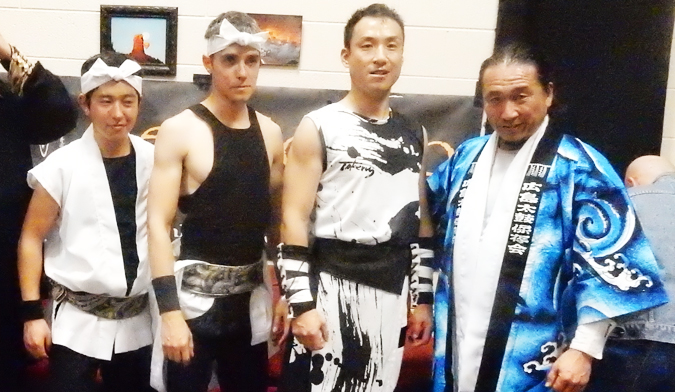 Arizona-based taiko player and taiko instructor Ken Koshio will perform a taiko tribute for the Love to Nippon 2017 event, a memorial for March 11, 2011 Great East Japan Earthquake and Tsunami, on Sunday, March 5, from 12:00 pm – 1:00 pm.

The taiko tribute will be held at the campus of the Los Angeles Police Department Headquarters, 100 West First Street, Los Angeles, CA 90012.

Koshio will be accompanied by his taiko troupe Kenzoo from Phoenix.

Originally from Nagoya, Ken Koshio is a singer and songwriter for 30 years, and taiko player and instructor for 10 years. He teaches taiko at his Wakonkan Taiko Dojo in downtown Phoenix, and presents major taiko program stages with his taiko group and other artists throughout a year in Arizona.

His annual “Taiko ‘n’ Roll Live Show” is becoming one of major events in Phoenix.

When the September 11, 2001 incident was happened, he was in Los Angeles. In the year of 2002, Koshio made a traveling concert tour from Los Angeles to New York City to pay tribute to those who died at the Sept. 11 attack and asked people he met in the tour to fold a paper to make a crane. When he arrived at New York City, the number of the origami cranes became 10,000.

He is a licensed taiko player of the Hiroshima style taiko drumming. Koshio carries on thousand-year-old Hiroshima taiko tradition that was taught by atomic bomb survivor and taiko master Itsuki Munakata of the Hiroshima Taiko Hozonkai.