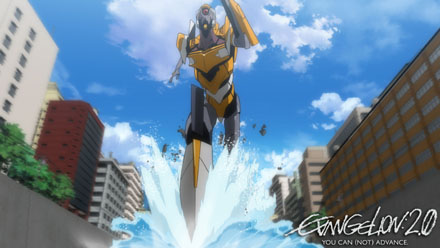 “Evangelion” series was aired in Japan in the mid 1990s and continues to remain popular for 12 years after its initial launch in Japan and the world.

“Evangelion: You Can (Not) Advance” is four part film series by reimaging the sci-fi animated series “Neon Genesis Evangelion” in the mid 1990s. Both the original and new series were written and directed by Hideaki Anno.

The part 1, “Evangelion 1.0: You Are (Not) Alone” won the highest honor in Japanese cinema when it won a Japanese Academy Prize for Best Animation in 2008.

The part 2, “Evangelion 2.0: You Are (Not) Advance” was screened at film festivals around the world, including the 2010 Fantasia Film Festival, the 2010 Sitges Film Festival and the 15th Lyon Asian Film Festival in France.

These anime films are Japanese language with English subtitle.