The Santa Ynez Valley Historical Museum is located in the quaint Western township of Santa Ynez. The address of the museum is 3596 Sagunto Street. The museum is right on the corner of Sagunto. 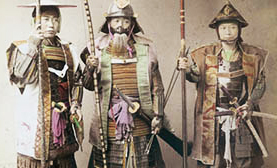 The History and Mystique of the Samurai and His Sword

7:00 pm “The Arms and Armor of Japan’s Supreme Warrier”
by Michael Yamasaki and Darin Furukawa

Samurai Life During the Edo Period: Arms and Letters

Edo period Japan was goverend by samurai who were hereditary warriors.  Samurai were expected to cultivate “the dual way of letters and war.” Dr. Roberts will introduce the samurai of the Edo period with a particular emphasis on the military skills and cultural activities in their lives.

The Arms and Armor of Japan’s Supreme Warrior

Michael Yamasaki, founder of Japanese sword dealer tetsugendo.com and consultant to various productions including the hit show, Pawn Stars, along with Darin S. Furukawa, artist, educator, and samurai arts specialist, present an introductory lecture on the arms and armor of Japan’s warrior class. Learn how the iconic armor of the samurai functioned not only as protection, but as a reflection of the wearer’s personality and prestige. Michael will demonstrate the sharpest sword in the world – the katana samurai sword.

Tickets to the evening talks are available at the above site or at the gate.