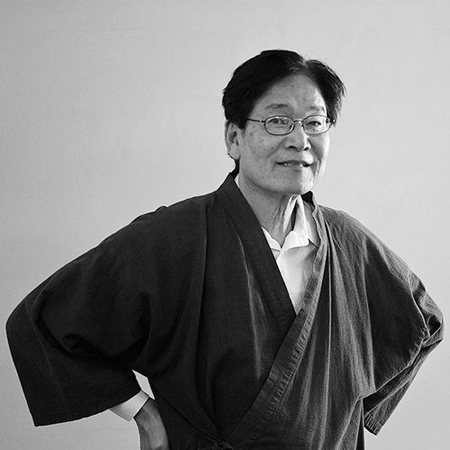 Kosawa was awarded “USA Andrew W. Mellon Fellow” in the field of theater and performance.

Born in Japan in 1948, Kosaka is an ordained Shingon Buddhist priest, a master of the art of Japanese archery, as well as the Artistic Director of the Japanese American Cultural and Community Center (JACCC).

After graduating from the Chouinard Art Institute, Los Angeles in 1970, he continued to study in the fields of Esoteric Buddhist art. He has been actively advocating Japanese culture and art at JACCC since 1984.

Most recently in 2012, Kosaka was commission by the J. Paul Getty Center to kickoff the Pacific Standard Time Performance (PST) and Public Art Festival by transforming the Center’s Arrival Plaza into a sculptural and performative installation with searchlights, dancers, and hundreds of spools of colorful thread – representing the Kalpa, Sanskrit for “a long period of time.”

On September 2013, a survey and retrospective 1969-1974 performance work titled, “Project series 46: Hirokazu Kosaka on the verandah” was exhibited at the Pomona College Art Museum.

Created in 2006 by the Ford, Rockefeller, Rasmuson and Prudential Foundations with $22 million in seed funding, United States Artists was founded to address the lack of unrestricted funding available to artists.

USA is currently funded by a broad range of philanthropic foundations and individuals committed to cultivating the vibrant character of contemporary culture in America. Through its signature USA Fellows program, United States Artists has distributed over $21 million in support of almost 450 artists.