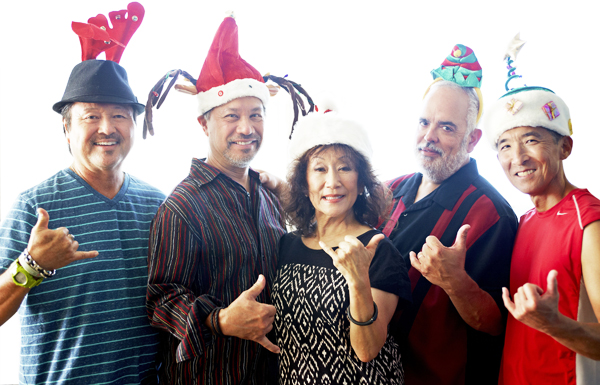 Grammy Award Nominee, Hiroshima returns to Little Tokyo for its 10th “Spirit of the Season” concert on Saturday, Dec. 14, at 7:30pm at the Aratani Japan America Theatre of the Japanese American Cultural and Community Center.

The “Spirit of the Season” concert provides a unique and engaging program of holiday songs done Hiroshima-style, and the Los Angeles premiere of their brand new CD, J-TOWN BEAT, which is dedicated to JACCC visionary Duane Ebata.

A post-Holiday-Bowl-Crenshaw-District entity, LosAKAtombros formed in late 2012/early 2013 with the objective of serving as a vehicle for improvisational musical collaboration, including the use of traditional Japanese folk songs as exploratory springboards.

The band will premiere songs from their J-TOWN BEAT CD and their program of holiday songs highlighted by June Kuramoto’s  hip version of “Rudolph the Red-Nose Reindeer,” Terry Steele’s unforgettable version of “Silent Night,” a selection of new holiday hats and much more.

The artists will be available to autograph CDs at special (Holiday Package) Spirit of the Season prices.

Call the Aratani Japan America Theatre box office at (213) 680-3700, to charge by phone or buy tickets online at www.jaccc.org.