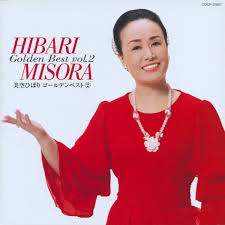 “Misora Hibara: A Tribute to a Legend,” the Grateful Crane Ensemble’s fond look-back at the life and career of one of the most popular Japanese entertainers of all-time, will be performed on Sunday, October 25 at 2 p.m. at the Orange County Buddhist Church in Anaheim.

Some have fond memories of attending overflow Hibari concerts as she toured Hawaii and the continental U.S in 1950 and again in 1973 when she performed at the Forum in Los Angeles, the Cow Palace in San Francisco and the Olympic Hotel in Seattle.

Younger generations and others interested in Japanese culture may not be familiar with her name but would probably recognize Hibari’s distinctive voice and songs – a familiar soundtrack for Japanese restaurants, summer festivals, karaoke singing and all things Japanese. Her prolific career spanned 40 years of continuous recording and film popularity as she began performing at age eight.

The two-act show will feature over twenty of Misora Hibari’s greatest hits, including “Kawa no Nagare no Youni” (Like the Flow of a River), “Tokyo Kid,” and “Yawara” (Judo); and remembrances of a difficult time when Japanese in war-devastated Japan and Japanese Americans were struggling to survive after World War II.

The show will also illustrate how “Hibari-chan’s” incredible voice, enormous talent and indomitable spirit helped to lift them up, and gave them encouragement and hope for a better future.

Directed by Keiko Kawashima, the show will feature the singing talents of Kawashima, Haruye Ioka, Merv Maruyama, Helen H. Ota and Fusako Shiotani. Musicians for the show include Grateful Crane’s musical director Scott Nagatani on piano, Danny Yamamoto (of Hiroshima) on drums and Japanese percussion, and Hiro Morozumi on keyboards and guitar.

The Orange County Buddhist Church is located at 909 S. Dale Avenue in Anaheim.  General admission tickets are $25.00, with a portion of the proceeds benefiting the OCBC Building Fund.  Tickets are available at the Orange County Buddhist Church or to charge by phone call the Grateful Crane ticket line at (310) 995-5841. Tickets will be held at will call for pick up on the day of the show.