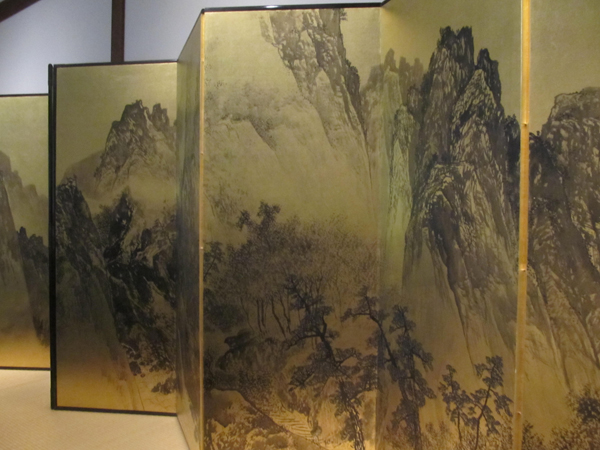 Fukui Kotei began his artistic training at the age of 12, when he studied Western and Japanese painting. In 1916 he resigned from his post as professor at Tokyo School of Fine Arts (today’s Tokyo University of the Arts) and embarked on a five-year journey through China and Korea. This pair of screens shows Mount Heng in Hunan Province, one of the “Five Great Mountains,” presumably done after sketches he prepared on his journey.

Near and Far: Landscapes by Japanese Artists

After traveling through the world of imaginary landscapes in the first rotation (Sept. 2 – Dec. 22, 2012) of the Clark Center’s exhibition Near and Far: Landscapes by Japanese Artists, the second rotation, Idealization of Reality, presents yet another form of landscape painting. This rotation features depictions of existing landscapes, either in Japan or abroad, as interpreted by Japanese artists.

Japan’s tradition of capturing “famous places” (meisho) such as Mount Fuji goes back to the Heian period (794–1185), when well-known locations were illustrated in the different seasons. Landscapes were either depicted because of their exceptional beauty, or because they had a particular connection to poetry and literature.

Artistic renditions of these famous locations, however, were in later times not solely portrayals of nature.

With the development of woodblock printing in the Edo period (1603–1868), artists such as Katsushika Hokusai (1760–1849) and Utagawa Hiroshige (1797–1858) concentrated on famous sights in the provinces as well as in the cities, thus broadening the canon of “famous places.”

Japanese artists did not limit themselves to scenes of their own home country, but also explored places abroad. However, although painters illustrated locales that truly existed, their depiction was often idealized in order to create a harmonious composition.

With artworks of different media ranging from the 17th to the 20th century, Idealization of Reality focuses on artistic renditions of existing places by combining scenery from Japan and overseas.

Near and Far: Landscapes by Japanese Artists, the second rotation, Idealization of Reality, is curated by Sonja Simonis, Curatorial Assistant of the Clark Center.

Admission: $5 for adults, $3 for students and active military service with valid ID. Children 12 and under free.

Weekly docent tours are held Saturdays at 1 pm and guided group tours can be arranged by calling the Center in advance at (559) 582-4915. www.ccjac.org