To celebrate the new year, the Japanese American Cultural and Community Center in Los Angeles presents its annual Oshogatsu festivities with its signature New Year program “Kotohajime” or The First Performance of the New Year on Sunday, January 4, 2015 at The Aratani Theatre at the JACCC campus, along with 17th Annual Shikishi Exhibition from January 4 to February 15, 2015 in the Doizaki Gallery at the JACCC building.

The New Year Celebration will feature the traditional dance by the Mai No Kai, the Cambodian dance by Khmer Art Academy, flute musician Riria Niimura, and with special guest performance by Japanese students from the Tohoku region in ongoing support for Japan’s recovery from the Great East Japan Earthquake as part of the TOMODACHI-Honda Cultural Exchange Program.

The ritual shooting of the arrow, a purification ceremony, will be performed by IKKYU of the Los Angeles Kyudo Archery Group.

To attend “Kotohajime” program, tickets are $20 for general, and $18 for JACCC members. 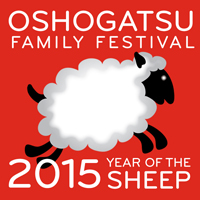 Oshogatsu is one of JANM’s biggest events of the year. Celebrate the Year of the Sheep with fun crafts, food, exciting cultural activities, and performances:

Visit janm.org/oshogatsufest2015 for the complete schedule.

*Free admission does not include Hello! Exploring the Supercute World of Hello Kitty.