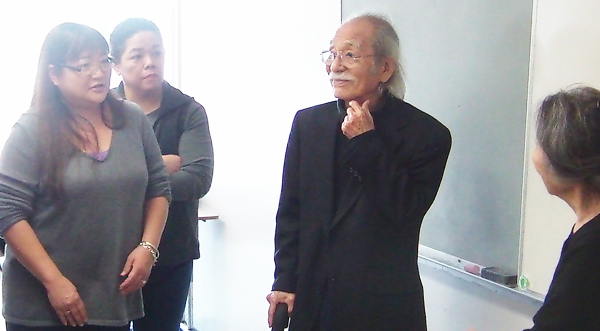 Dr.  Kato is an ordained Zen monk, and served at Zenshuji Soto Mission since 1963. He was chief priest of Fuganji in Nara, Japan.

He has written at least 8 books, held academic positions at UC Berkeley, Cal State Los Angeles, and was Dean of International Studies at Nagoya University of Foreign Studies.

Dr. Kato moved to Zenshuji temple in Los Angeles by the request of the Zen Master Reirin Yamada in 1963. Upon his relocation, he convinced the Department of Foreign Languages and Literatures at California State University, Los Angeles.

His request was met and the university began to have the Japanese Language and Literature courses for the first time.

While Dr. Kato held a position in the Soto Zen Buddhism, his academic endeavor continued. The Japanese program had blossomed to complete four-year-program having all necessary courses including cultural, historical and social areas.

Beside his academic endeavor in the university, Dr. Kato found the Association of the Teachers of Southern California, in which Japanese teachers and professors can share information and also establish methodological workshops and other important and professional communications.

The Japanese language is a unique language; pitch accented tonality, and Chinese characters (Japanized thoroughly) combined with hiragana and katakana phonetics. Teaching Japanese requires exhaustive effort on the part of teachers – knowing Japanese alone is not enough to teach the language, history, culture.

For these reasons, Teachers of Japanese association had to organize and have intensive study to fulfill their roles.

“The Master and the Disciple” Udunbhara, Minnesota, U.S.A.1971

“The English Language viewed from the Current of Cultural Trends: From the Beginning to the Modern Varieties” Sanshusha, Tokyo, Japan.1996

(The above work was supported by the Ministry of Education, Japan. It was the Science Research Grant – Dr. Kato was the first to receive this prestigious grant at the Nagoya University of Foreign Studies)

“English Etymology: From A to Z” Maruzen Library, Tokyo, Japan. 1998