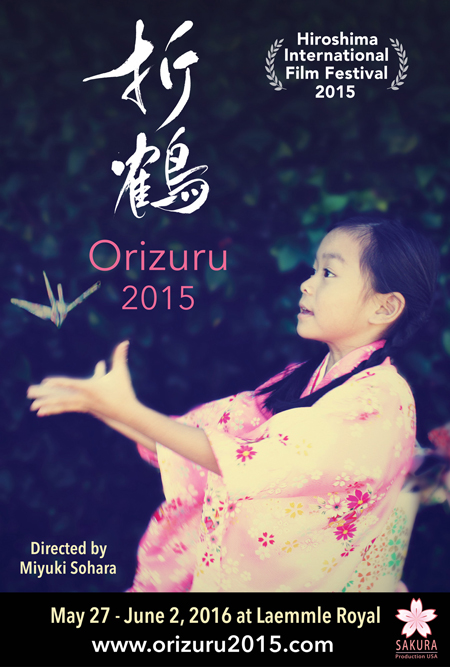 Short film about Hiroshima paper crane story to be shown at West Los Angeles, May 27 – June 2

A 25-minute film depicting the real life of Hiroshima girl after the atomic bombing in 1945 and a fictitious World War II American veteran of Pearl Harbor will be screened from May 27 through June 2 at Laemmle Royal Theatre, 11523 Santa Monica Blvd, Los Angeles, CA 90025.

“Orizuru 2015” was directed by multi-talented Miyuki Sohara of Los Angeles and played by professional actors such as Richard Burner, Toshi Toda and James Kyson.

The film is spoken in English, and does not contain any images or description of war.

Orizuru means fold paper cranes, symbol of peace movement after the real story of Hiroshima survivor Sadako Sasaki who died at the age of 12 by leukemia, a disease caused by the atomic-bombing.

To coincide the 70th anniversary of Hiroshima and Nagazaki bombing, the film was shot in 2015 and shown at Hiroshima International Film Festival in November 2015.

Film screening and talk show featuring the family members of Sadako Sadaki, a grandson of President Truman who decided the atomic-bombing on Japan, and the filmmaker will be held on May 28, 29, 30 at 11:30 am. Tickets are $20 for adults, $15 for students.

As the related program, “Sadako’s Omoiyari Spirit” will be held on May 25 at 6:30 pm at Toyota Meeting Hall in the Torrance Cultural Arts Center, 3330 Civic Center Drive, Torrance, CA 90503. On side tickets are $60, but the price will be discounted in online resale at www.orizuru2015.com by May 20.

The proceeds of the film and talk events will be used for School Visit Program by Dream Orizuru Project.