San Diego – Worldwide Initiative to Safeguard Humanity or San Diego-WISH will observe Hiroshima Day (Aug. 6) and Nagasaki Day (Aug. 9) in the event “2016 International Peace and Humanity Day” named by itself on Aug. 5 and related events on Aug. 10 and 12 in San Diego:

This event is a part of global simultaneous events initiated by the “Mayors for Peace” representing more than 7,095 cities worldwide.

The event will include a ceremonial presentation of 1,000 origami cranes in a symbolic wish for governments worldwide to move toward abandoning nuclear weapons and eliminating the threat of nuclear war.

The audience will hear from longtime San Diego resident Mike Kawamura, a Hiroshima survivor who was two years old at the time of the bombing; and the day will conclude with a vocal performance by acclaimed Japanese operatic tenor Gohei Kohashi, a third-generation atomic bomb survivor.

This event is open to the public at no admission charge, with arts, crafts, entertainment, food and refreshments available. 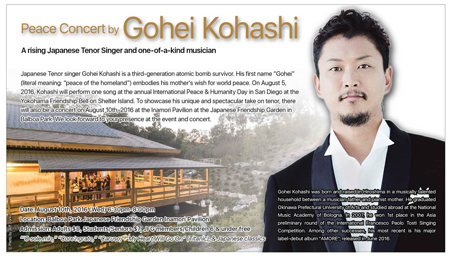 On Wednesday, Aug. 10, from 6:30 pm to 8:00 pm at the Inamori Pavilion in the Japanese Friendship Garden of San Diego in Balboa Park, tenor singer Gohei Kohashi will perform a peace concert.

Kohashi, whose first name “Gohei” translates roughly as “peace in my hometown,” will showcase his unique and dazzling take on tenor, with many selections from “AMORE,” his June 2016 album — including “Il Mio Cuore Va,” (“My Heart Will Go On”), the theme from Titanic. Tickets are $8 for adults, $7 for seniors and students, and free for garden members and children under 6.

This concert is organized by the Japanese Friendship Garden of San Diego. www.niwa.org

On Friday, Aug. 12, from 6:00pm to 8:45pm at the Coronado City Council Chambers and Community Pool, 1825 Strand Way, Coronado, CA  92118, with a floating of illuminated paper lanterns in a silent prayer for world peace.

This event is open to the public at no admission charge, with arts, crafts, entertainment, food and refreshments available.