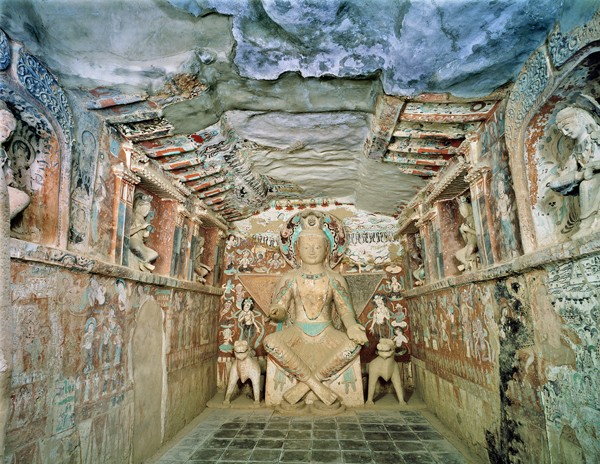 The Mogao caves, located near the town of Dunhuang in the Gobi Desert of northwest China, comprise some 500 decorated Buddhist cave temples dating from the 4th to the 14th century.

Filled with exquisite wall paintings and sculptures, the caves bear witness to the intense religious, artistic, and cultural exchanges along the Silk Road, the trade routes linking East and West.

Cave Temples of Dunhuang: Buddhist Art on China’s Silk Road features numerous objects originally from the site—such as paintings and manuscripts that have rarely, if ever, traveled to the United States, as well as three spectacular full-size cave replicas. The exhibition celebrates more than 25 years of collaboration between the Getty Conservation Institute and the Dunhuang Academy to preserve this UNESCO World Heritage Site. 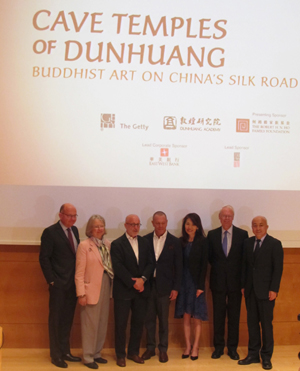 Representatives from the J. Paul Getty Trust, the Getty Conservation Institute, the Getty Research Institute, the Dunhuang Academy, and major sponsors of the exhibition are introduced at the press conference at the Getty Center. (Cultural News Photo)

The J. Paul Getty Trust, its affiliated institutes, and China’s conservation institute Wednesday announced new exhibition “Cave Temple of Dunhuang: Buddhist Art on China’s Silk Road” will be on view from May 7, 2016 through Sept. 4, 2016 at the Getty Center in Los Angeles.  The major fund is provided by The Robert H. N. Ho Family Foundation in Hong Kong.

Dunhuang is located in the Gobi Desert of northwest China.

The exhibition will feature rare objects found at the famous Mogao Grottoes (Bakkokutsu in Japanese pronunciation) site, along with full-scale replicas of three cave temples. Mogao Grottoes are an ancient Silk Road sites dating from the 4th to 14th centuries. There are nearly 500 decorated Buddhist cave temples that survive today.

The exhibition will include paintings on silk, textiles, drawings, and manuscripts on loan from the British Museum, the British Library, the Musee Guimet, and the Bibliotheque nationale of France – objects that have rarely.

Among  the objects to be exhibited is the Diamond Sutra (a sacred Mahayana Buddhist text) that dates to the year 868. Coming to the Getty on a loan agreed in principle with the British Library, the Diamond Sutra is the world’s oldest dated complete printed book.

The Getty will present a slate of public programs, performances, lectures and tours related to the exhibition. The Getty has also partnered with UCLA to offer a major, international scholarly symposium in May 2016. Details will be announced later this year.

For more information about the exhibition, visit www.getty.edu/cavetemples