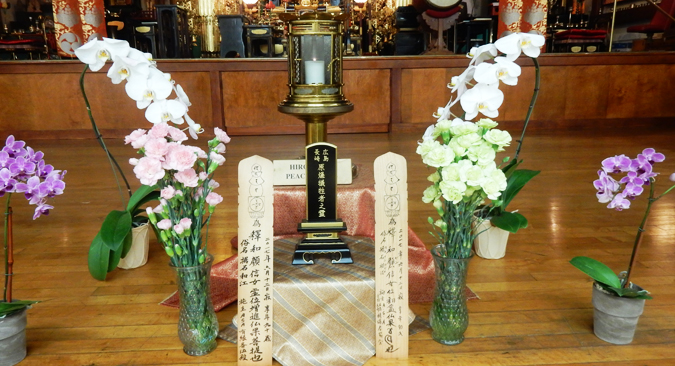 Hiroshima Peace Flame and a memorial tablet for Hiroshima – Nagasaki Hibakusha were place in the center stage of Koyasn Buddhist Temple’s mail hall for the memorial service. (Cultural News Photo)

Words of Commemoration was delivered by guest speaker Dr. Takeshi Matsumoto, who are working as physician in Los Angeles for over 30 years, and helped doctors from Japan to examine Hibakusha in Los Angeles from 1980s to early 2000s.

Dr. Matsumoto talked about his dream after he heard about the Hiroshima Atomic bombing from late Kaz Suyeishi, president of the Hibakusha association, and showed his painting inspired by Suyeishi’s story. (Cultural News Video)